Itongadol.- The Asociation of Israeli Delegations in Argentina (DAIA) qualifies as «fierce» the increase in the number of antisemitic incidents in Argentina, after the anual report over the 107 percent increase during 2018 in comparation with the previous year.

This way was how the president of DAIA, Jorge Knoblovits, present today the details of the anual report of antisemitism, in a reunion realized in the Centro Cultural Kirchner of Buenos Aires.

Anyway, the communitarian leader said that “It is not fierce only in Argentina, it is fierce worldwide”.

“I start with an autocritic: with the results of the investigation and the results of the center of social studies, the increment of heat speeches and antisemitic acts that DAIA registerd, I think we hadn´t done enough for the memory and fighting the hate speeches beacuse the increase is fierce”, added Knoblovits after presenting the document.

Also, he remarks that “in Europe, reciently The Economist determines that 34 percent of europeans, where Shoa took place and where 6 millions died, dosen’t registres what Holocaust is”.

“In Argentina, being antisemitic and discriminating is a crime. He is punished by the Law. It is a great achievement, beacuse the communities live in peace and we know that discrimination is a crime”, highlighted the president of DAIA.

In this track, he describes that the increase of 107 percent had impulsed DAIA to develope “an app for people to can denunce this acts, not only antisemitic, any time of discrimination”.

“Also, whe put totems in subway, bus and train station, and in shopping for people to register that there is a place for register the denunces that are wecolme», afirms.

Knoblovits sustain that “many of the denunces” recibed where judicialized. “The sensation that I have is that we give judicial fight, but we are losing the culture fight. That’s the battle that we don’t want to lose. Inside the culture field, we are gonna do everything possible so we don’t have never again discrimination acts in Argentina, or at least those are gonna be fighted by us”, concluded. 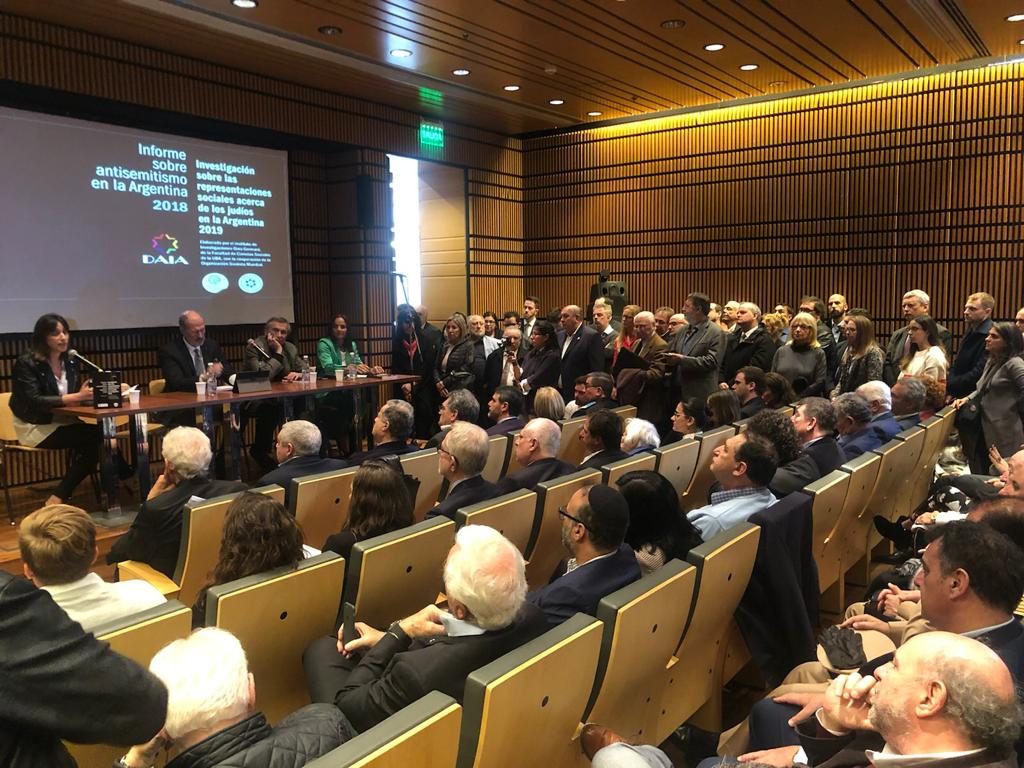 The estadistics and investigation will be presented by DAIA and INADI (National Institute against Discrimination, Xenophobia and Racism).

The anual report of antisemitism was realized by DAIA with the Gino Germani Institute and the Center of Social Studies.

This year is the number 20 since the fisrt anual report published by the political organization of the argentinian jewish community, that stablished that practice in 1998.

Report shows that 68% of the incidents had place in Buenos Aires, and 32% where in the rest of the country. About the 834 reported incidents, DAIA said that 71% happend online, mostly in web sites, and 17% of that number appeares in social networks.

The report also shows that 27% of antisemitic material online had xenophobia against jews, while 18% was pushed by the events that took place in Middle East, 17% had relation with nazi simbology and jewish world domination conspiracy among other misconceptions.

Gino Germani Insitute present a poll of social perceptions of Jews in Argentina.

The poll shows that 53% of 1443 people interviewed agrees that there is discrimination against jews, while 87% didn’t know what it was the zionism.

The Report remarks that 61% agreed with the antisemitic prejudice of the «influence» of jews in international markets and 47% belives that jews are the first in not helping people in need.

The information for this poll was collected between June and July of this year.

In the presentation of the report, will join Knoblovits, the president of the Conferencia Episcopal Argentina y the bishop of San Isidro Monseñor Oscar Ojea, Néstor Cohen, who runs the investigation of Gino Germani Institute, the director of Social Center, Marisa Braylan and one of the principal investigatores, Verónica Constantino.