Itongadol/Agencia AJN.- Before the 26th anniversary of the terrorist attack on AMIA, which claimed 85 lives on 18 July 1994, Argentine President Alberto Fernandez gave an interview to the American Jewish Committee (AJC) where he talked about Argentina’s relationship with Israel, about the global fight against anti-Semitism and about AMIA bombing.

«We are the second largest community outside of Israel and for us there is a very strong brotherhood with the community. The attack took the victims away and took a piece of each of us,» he added in dialogue with Dina Siegel Vann, director of the Belfer Institute for Latin American Affairs of the AJC.

Regarding his visit to Israel in January to participate in the Holocaust International Forum and the meeting with Prime Minister Benjamin Netanyahu, Fernandez stressed that «relations between Israel and Argentina are optimal, and they should be. We are obliged to have very good relations because we have a very important Jewish community. There is no room for us not to get along. That day was very moving for me. We remembered a moment in history that mixed tragedy and freedom, the misery they suffered in Auschwitz and the liberation. Any human being can only be touched by something like that. It was very shocking”.

«I was able to meet Netanyahu and we were able to talk very frankly. I will always be grateful because he was very generous with Argentina helping with the debt and the problem with the IMF.»

He also recalled that «Argentina was the only non-European or North American country that participated». «I’m glad about Argentina’s participation because it’s the country I want, looking for freedom and respect for others.»

As for the Israeli Prime Minister, he recalled: «I was able to meet Netanyahu and we were able to talk very frankly. I will always be grateful because he was very generous with Argentina by helping with the debt and the problem with the IMF. He was very willing to help us and really helped us. I am grateful. I hope that the bond will continue to be this: a bond of affection, of commitment.”

In addition, he said he discussed with Netanyahu about «how to deepen trade between Mercosur and Israel, and he transmitted me some things to review in relation to rates that I already shared with the other presidents of the block, to take into account and correct».

Regarding Argentina’s adoption of the International Holocaust Remembrance Alliance’s (IHRA) definition of anti-Semitism, the President said: «Anti-Semitism in Argentina is absolutely linked to right-wing extremist groups. The Argentine left is not anti-Semitic or anti-Zionist or anything like that. There are tiny right-wing groups, which are somewhat neo-Nazis, but they are tiny, which appear sporadically and generate repugnant acts such as painting swastikas. The vast majority of Argentina doesn’t have this problem.

«We have in the province (of Buenos Aires) the first governor of Jewish origin, and nobody started to think if he is Jewish or not, it is his qualities that have taken him there.»

«The Jewish society is part of the full Argentine society. It is integrated. Everyone respects their religion, their origin, it is not something that Argentina has to suffer. The societies that suffer from that, a society that discriminates or mistreats another sector, is a suffering society, that does not advance. Argentina does not have that problem. For us to adopt the broadest definition of anti-Semitism is easy, because that’s what most Argentines believe. There has never been that debate,» he added.

He also referred to Axel Kicillof: «We have in the province (of Buenos Aires) the first governor of Jewish origin, and no one thought about whether he is Jewish or not, it is his qualities that have led him there. Nobody stopped voting for him or voted for him because he was Jewish, but because of the ideals he expresses».

Fernandez also noted that anti-Semites are «a tiny minority that when it appears is repudiated by society as a whole. A society that segregates, that divides, that mistreats is a bad society. In social terms it is bad, the human condition does not authorize us to discriminate against another because of ideologies, their origin, their creed, their skin color. When discrimination appears in a society, the only thing that that society does is to degrade itself, to become a worse society. In Argentina there are very small episodes that when they appear are repudiated.”

«The best societies are those that respect others, those that develop best, those that give rights. The problem that the Jewish people have suffered throughout history, which has had its most terrible point with the Holocaust, leads us to have to make sure that this does not happen to anyone. The decree that takes the IHRA definition does not cost anything, because that is what most of us believe,» he stressed.

«AMIA terror attack was very painful for all Argentines. It was not against the Jewish community, it was against Argentina. Many of the victims are members of the community, but they are Argentines and it hurts», Fernandez said.

A sensitive moment in the conversation was when the Argentine president recalled that one of the 85 victims of the attack had been his student at the Law School: «I was a teacher at the UBA and had Paola Czyzewski as my student. It hurt me a lot when I had to give her an exam, an 8, and I called her to give her the exam and they told me that she was in AMIA at the moment of the attack. She was a very loved and respected student, a very good student, and she had met her death in such a tragic way.”

Iran and the Memorandum of Understanding

«Argentina is trying, sometimes better and sometimes worse, to find out what really happened there (in the attack). Argentina’s obstacle to justice was that Iran never gave in nor allowed the extradition of those whom Justice considered guilty. Argentina has had problems moving forward with the investigation until today. We are not at peace with this; we continue to demand that the guilty parties take responsibility for what they have done. It is a debt that we owe Argentina, because there are people who have done something tremendous and have not paid, went unpunished,» said the head of state.

«The Memorandum, which I criticized a lot, was an attempt to unravel this cause. We need to know the truth. As long as that truth is unresolved and the justice process is not completed, we are not in peace. Every day that a commemoration of the attack is approaching is a deep sorrow for all of us, to know that we could not materialize that which is so important as a society which is the imperative of justice,» he said.

Regarding the decision to keep Hezbollah on the list of terrorist organizations, Alberto Fernandez said: «Terrorism has no place to grow in any democratic society. It must be punished because it disturbs tolerance and peace».

«We have always condemned terrorism, this management and the previous ones.»

«Argentina has a past of having endured state terrorism (the 1976 civil-military dictatorship). We know what that means: thousands of disappeared, many murdered, others exiled. Terrorism is inadmissible and it is impossible for it to coexist with a democracy. With Hezbollah, action has been taken, blocking their assets and preventing them from financing their operations. We have always respected that,» he said.

«We have always acted in the same way. We have always condemned terrorism, this management and the previous ones. And it has to do with what happened to us as Argentines. This should not be debated. It’s like discussing the Holocaust, that only generates repudiation and we must put ourselves on the side of the victims. It cannot be questioned or denied, it must be remembered and prevented from happening. Avoiding it and not remembering that it exists allows it to resurface,» he said.

In addition, he said: «We have seen how terrorism has spread and how it ends up attacking innocent people. We cannot tolerate that. When we take that position, we don’t do it with the intention of having leadership, in any case it is a call for reflection to the international community. It alters democratic coexistence, it alters social coexistence and, worst of all, it takes away innocent victims, who are not at war or in the conflict, they are just victims, like Paola.
In this, we in Argentina are inflexible. We know what this is about, and we know that it is something that only causes us pain.» 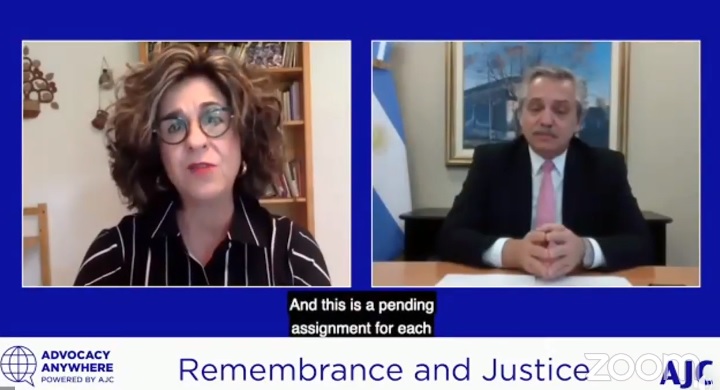 Venezuela and the United States

After discussing the previous subjects, the president was consulted about the situation in Venezuela, and he said that «we must be careful». «We share the idea that democratic coexistence is altered in Venezuela,» although he clarified: «I am not willing to impose a solution on Venezuela.»

About United States, Fernández stated that «Argentina and the US have a correct relationship». «We have some differences but we have to learn to live together respecting this differences», he said.

«The differences also appear when we talk about Venezuela. I would say that with the U.S. we share the idea that democratic activity in Venezuela has been altered. If a country has seen so many citizens emigrate, it is clear that democratic coexistence must be resolved. About the solution and the way to solve it, we do not agree. In the midst of an economic crisis, a blocking is not a solution. There are Venezuelans who are suffering from it. If there is a pandemic and a country is blocked, it does not impact only a government, it makes people suffer. In times of pandemics, nobody should put up a blockade,» he concluded.