INTERVIEW WITH OLIM: «THE KEREN LEYEDIDUT IS ALWAYS AWARE ON WHAT WE NEED»

ItonGadol.- Ximena Dolgonos currently lives in La Calera, a small city in the province of Córdoba (Argentina), and at the end of September she will fulfill the dream that she has been planning with her family for several years: to start a new life in Israel. Together with her mother, her husband and her four children, Ximena will make aliyah with Keren Leyedidut and in dialogue with ItonGadol she told how the organization is accompanying her, both financially and emotionally.

Ximena has been married to Gonzalo Cedrón for 20 years. 6 years ago he converted to Judaism and they were married in chuppah 4 years ago. In this interview, she reviewed how this initiative came about and what were the reasons that prompted her to make the decision to live in Israel.

Despite the pandemic, aliyah did not stop and Keren Leyedidut stood by the new immigrants at every opportunity. Tomorrow, 73 olim will fly from Argentina to Israel, and between next Monday and Tuesday another 67 will do so. In total, there will be 140 olim in one week.

-How did the idea of ​​making aliyah come up?
– Many years ago, when my third daughter was born, the idea of ​​making aliyah came up. And the idea was floating. A couple of years ago, my oldest son went to Jai to tour Israel, and he stayed for ten more days at a friend’s house. And that was the moment when we started to think again. He came back super happy and from that moment the idea began to take reinforce.
When he came back, he said that finishing his studies he will be leaving back again to Israel. He had even thought about the possibility of going to Naalé, to finish high school there. And two years ago with my husband we said: ‘If we feel like it and the boys say that at some point they are going to leave, I don’t see myself in my old age knitting booties in the distance. Why don’t we make it a family project? ‘ So we decided to go ahead. 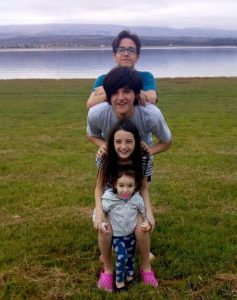 -How did the link with Keren Leyedidut arise?
-When a friend of ours went to Jain, in Israel, my son stopped at her house there. Later on, she connected me with Leo Naidorf, from Keren Leyedidut Argentina. We met with him and he told us that they were going to accompany us, so we remain calm. We started interacting with Keren Leyedidut in 2019. At one point we stopped because my 86-year-old mom was wondering whether or not to go to Israel. But later, when the pandemic started, my mom came to live with us and decided to travel too. And there we reconnected with Keren Leyedidut back again.

-How important was this organization as a family that decided to emigrate to a new country?
– The truth is that I did not know them. And they ended up being super important. First, for the support in every way. Not only financially, because they help you financially when you arrive, but also emotional support. We had a chat with Leo, because the truth is that there are a lot of questions that you ask yourself. We had a lot of uncertainty, because for someone who is about to leave, it is leaving a lifetime behind, it is important. He told a story of an adult couple who had to leave their dishes from when they got married, and the truth is that they are things that go further … He guided us in what we had to take, what would be good, how to think about the trip and moving. It seems to me that a support, an accompaniment is good, it is important and beautiful.

-How important was this organization as a family that decided to emigrate to a new country?
– The truth is that I did not know them, but they ended up being super important. First, for the support in every way. Not only financially, because they help you financially when you arrive, but also emotionally. We had a chat with Leo, because the truth is that there are a lot of questions you ask yourself. We had a lot of uncertainty, because for someone who is about to leave, it is about leaving a lifetime behind. He told a story of an adult couple who had to leave their fine crockery from when they got married, and the truth is that there are things that go further … He guided us in what we had to take, what would be good, how to think about the trip and the moving itself. It feels good to have that support, it is important and beautiful being accompanied. 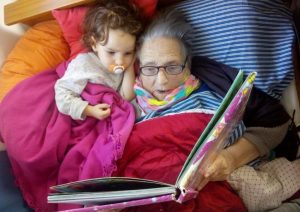 -Córdoba is one of the main provinces of Argentina. Do you know other families there who are traveling?
-Yes, most of them have already traveled. I work at school, I am a Hebrew mora and four of my classmates have left school in recent months. The one who was the general director of the Jewish area, a companion who was coordinator and two Morot. One left with her daughter, another left alone because she already has children living there and the other two left with the family. They all went hand in hand with Keren Leyedidut.

-Is there any particular reason that made you take this decision in the last year? The pandemic, the crisis in Argentina, the economy, missing the family?
-I think a little bit of everything. The pandemic added a lot, because we had to close our bakery business due the Covid pandemic. But the equation is not only economic, the decision also has to do with something else, with something calling you out from to go live in Israel. It has to do with a feeling too, this madness of leaving everything. Beyond closing the bakery store we had, we continued working at home. I have my job, as Mora, my husband has another job … so the reason is not only the closure of our business, or any other economic reasons. Another part has also to do with the future of the boys. My oldest son is 18 years old, but I have a hard time letting go of him, letting him get out by himself. It seems to me that here in Argentina there is a lot of fear, and you also see the life they are living in Israel, a good life and a better one for the younges. My daughter, who is going to turn 12 years old, has friends who also left recently, and I see that they go to school or to the parck by themselves, that they go by theirselves here, there. And when she knew we were leaving to Israel, I got shocked by a questiong she made: «Am I going to be able to go out with my cell phone'», and she can’t believe it.

-How much does an organization like Keren Layedidut help in accompanying the decision?
-They are always aware of what one needs. You have to get a whole life into two suitcases but they give you one extra and it is something very important, because it allows you the freedom to perhaps take things that you had from forever. Maybe it sounds silly, but for someone who is leaving a life behind it is important, at least for me, I am very attached to memories. And the financial help that they give when you get there is also important, because it is like a starting point to get ahead. They have continued to help many people on this path of integration in a totally new place and it is super valuable to say the truth.

-Do you think there are other families who will follow your steps?
-Yes, I think so. When I went to apostille the birth certificates at the Colegio de Escribanos, the guy at the front desk asked me why I was leaving. I told him ‘because a lot of people are leaving’ and he replied: ‘This is a biblical exodus’. Perhaps the pandemic made it stronger and many people are wanting to leave, and many of our friends are beginning to call us making questions. They want to know more about it because they are already working on the idea of ​​leaving.

-As stories like yours and your family continues to repeat itself, means that things must be working well obviously…
-Yes, totally. I am in four WhatsApp groups and the truth is that they all agree on how well Keren Leyedidut works. They have continued to help them, accompanying them. The people who are leaving, the people who are on the road and the people who have already arrived: they all agree on the same thing. There is no one who says a word that I was not met with something. Quite the opposite.